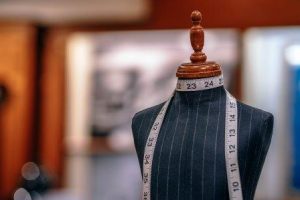 Too casual for the office till the 1940s, but now doing double the business,the DB suit jacket descends from naval officer uniforms.  Key to the image of 1930s gangsters & 1980s bankers, its most iconic wearers are rule-breakers whose names turn up on all-time best-dressed lists.  Menswear detail: correct button stance is 6 x 2  (2 of the 6 buttons close)